When agent jobs run, it makes requests to the target website’s host servers to collect data, download images, etc. An INet error occurs when one of these requests fails.

Common INET errors
The two most common causes of INet errors are:

Solutions
Optimize the agent to avoid detection by the target website’s host server to prevent request failures. The three most common solutions are to:

Resume the agent job
While it's difficult to identify the exact cause of an INet error event, you can frequently be resolved by resuming the agent job.

The agent job can be resumed by selecting the agent in the Web Console and selecting Resume. 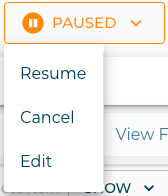 Change the Premium Harvesting location
If the agent is running on premium harvesting and continues to experience INet errors, the website’s host server might have detected the agent despite the proxy routing. When this happens, you have the option of changing the geolocation of the requests you are sending to the host server which might temporarily unblock the agent.

Optimize the agent
The agent’s behavior might clash with the way the website behaves or is causing the agent to be detected by the website. An agent becomes more stable and less noticeable when the number of requests made to the target website is decreased.

There are a few methods for decreasing the number of requests an agent job makes to a website:

Possible INet Errors
The following is a select list of the INet errors an agent job might encounter. A complete list of all INet error codes is available on Microsoft’s Error Codes page.

Was this article helpful?
Thank you for your feedback! Our team will get back to you
How can we improve this article?
Your feedback
Comment
Comment (Optional)
Character limit : 500
Please enter your comment
Email (Optional)
Email

By entering and using this site, you consent to the use of only necessary cookies to enhance your site experience and improve our services.